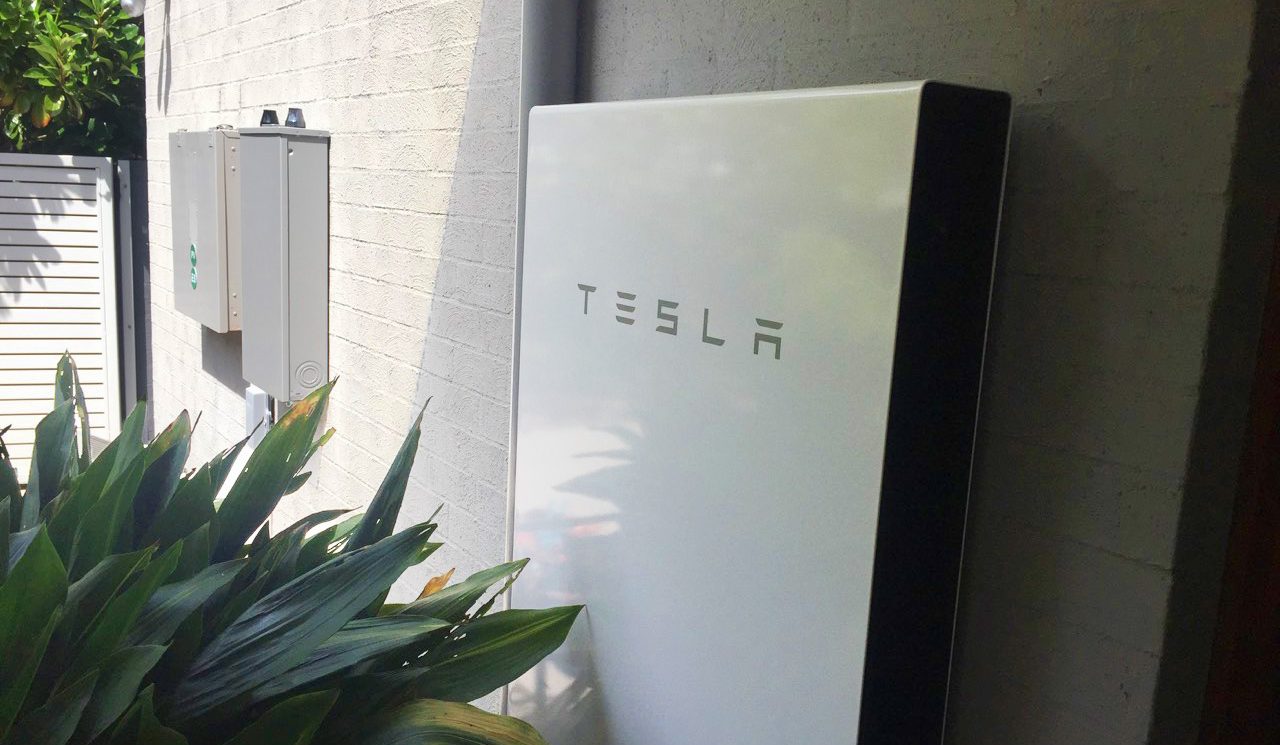 You’d be hard-pressed to name a company other than Tesla that has made a global impact in such a short space of time.

Visionary, bold, and unconventional, Tesla was the first company to make electric vehicles that people actually wanted to buy. And they’re not just good; many experts have called them the best cars ever made.

Building on the same technology that powers its electric cars, Tesla is also advancing the world of energy storage. In 2017 the company installed a 100MW battery system in South Australia to help stabilise the ageing and unreliable electricity grid. Not only has the Tesla battery exceeded all expectations, but it also saved the state $40 million in its first year alone.

And then, there’s the Tesla Powerwall. A battery system that’s small enough to fit in your garage – and powerful enough to run your entire home.

If you’re considering going solar – or you already have – the Powerwall is probably something you’ve thought about as the next step towards energy independence.

But how does the Powerwall work? What are its capabilities? And can it run your home even if you’re not connected to the grid?

Well, let’s take a look and find some answers.

What Is the Tesla Powerwall?

To call the Tesla Powerwall a revolution is not too far of a stretch.

Unveiled in 2015, the Powerwall is a compact, rechargeable lithium battery made specifically for households. Once connected to a rooftop solar system, it stores excess solar energy during the day and uses it to power the home at night.

Sleek, quick to install, and maintenance-free, the Powerwall was the first product to thrust home battery storage into the public conversation. And when you consider that Tesla has never spent a single dollar on advertising, it’s all the more impressive.

The Tesla Powerwall 2 is the current generation of the battery and was released in 2016. It contains a rechargeable lithium-ion battery pack with a 13.5kWh capacity, combined with an in-built battery inverter. Unlike traditional lead acid batteries that are heavy, bulky, and require maintenance, the Powerwall is an all-in-one slimline unit that can be installed both indoors and outdoors.

The Powerwall’s generous storage capacity is enough to meet the demands of many homes – leaving the grid purely as a backup. For additional storage, you can link multiple Powerwalls together – all the way up to 10 in one system.

How Does the Tesla Powerwall Work?

Almost all ground-breaking products have two things in common; they’re intelligent and they’re simple. And the Tesla Powerwall is no exception here.

Whereas traditional batteries require a design process, can take up lots of space, and involve a complex system of hardware and cables – the Powerwall is an all-in-one system.

The slimline unit contains two key components: a 13.5kWh battery, and a 5.0kW battery inverter. There is also separate ‘gateway’ unit which allows you to monitor (and control) your system via the Tesla app.

Your house runs on AC electricity, but your solar panels produce DC electricity. For this reason, every solar system includes an inverter that converts DC to AC so that you can power your home or export energy to the grid.

With battery storage in the mix, there’s an extra challenge: batteries can only store DC electricity. Because of this, an additional conversion is needed to allow energy in and out of the Powerwall. This is where Tesla’s in-built 5kW battery inverter comes in, controlling this process automatically and quietly.

The Powerwall can supply up to 5000W of continuous energy, and also has a ‘peak mode’ which can bump this up to 7000W for 10 seconds. This means that if your home power demand spikes for a short time, the Powerwall can increase its output to meet your energy demand.

Does the Powerwall Work with All Solar Inverters?

Even though the Powerwall has a built-in battery inverter, it still needs to be connected to a solar inverter to form a complete system. Luckily, the Powerwall works with all ‘third party’ solar inverters, meaning you can incorporate it into any new or existing grid-connected system. If your solar inverter was built from 2016 onwards, it can also take advantage of the Powerwall’s backup capability to power your home during a blackout.

Depending on how your system is designed, you can back up your entire home or only dedicated appliances devices such as fridges, lights, and computers.

You can even install a Powerwall if you don’t have solar. The battery is capable of charging from off-peak during the day and using this cheaper electricity to power your home at night.

How Long Does a Tesla Powerwall Last?

The Powerwall is simple to install, requires no maintenance, and stores a large amount of power. But for a company like Tesla, that’s not quite enough. The Powerwall has also raised the bar in terms of battery warranty and lifespan.

Tesla Australia offers a 10-year warranty for the Powerwall, meaning it will be free of defects for a full decade following the initial installation. Tesla also guarantees that after ten years of operation, the Powerwall will still retain at least 70% of its original capacity – which is 9.4 kWh (70% of 13.5). For grid-connected applications, the Tesla warranty also permits unlimited daily cycles, which was unheard of in lithium batteries only a few years ago.

Being as the Powerwall 2 was only released in 2016, we haven’t had enough time to see exactly how it performs over a ten-year period and beyond. However, results from the first few years of operation are very encouraging, with most units performing well ahead of their warranty projections.

And you may have read in the news recently that a Tesla owner has already driven his Model S almost half a million kilometres on a single battery pack. And which battery cells are powering his electric car? The exact same cells that you’ll find in the Powerwall 2.

Can the Tesla Powerwall Be Used Off-Grid?

But in two words: not yet.

Tesla’s battery works in partnership with the electrical grid – but it’s not ready to replace it. It can provide backup power for short periods, but it can’t do it all day, every day. And while the Powerwall has a very generous battery capacity, it can quickly become limiting when there is no electricity grid or generator as a backup.

The good news is that there are many brands of battery made specifically to meet the demands of a self-sufficient home. These include both lithium and lead-acid batteries from world leaders such as BAE, Sonnenschein, BYD, and LG Chem. We can use these brands to design an off-grid system that meets your personal requirements, with the solar and storage capacity to match your year-round energy needs.

The Off-Grid Powerwall: A Matter of ‘When,’ Not ‘If’

If you want to run your home entirely from a Tesla Powerwall (and maybe even charge your new Cybertruck in the process), the future is looking bright. For some time now, Tesla has been working to make the Powerwall off-grid ready. And so, it seems like just a matter of time before it will be available for standalone systems as well.

In the meantime, you can read our latest news and developments, follow us on social media, or talk with one of our experts about your existing solar and battery options.

Should I Go Off-Grid if I Already Have Mains Power?

With solar power going from strength to strength, and the recent emergence of home battery systems – is it time to say goodbye to the grid altogether?

In our honest opinion: don’t be in too much of a hurry to pull the plug.

While the idea of being self-sufficient has strong appeal, the electricity grid is still extremely valuable to the majority of homes. A Tesla Powerwall, combined with a powerful rooftop solar system, can meet the demands of many households – but there are still times when the grid is needed to keep the lights on. During periods of bad weather, short winter days, or spikes in power use, most homes still need the grid to meet their overall energy demand.

In the future, as solar panels continue to increase in efficiency and batteries reduce in cost, having enough solar and storage capacity may no longer be an issue. But for now, you’re still better off staying connected to the grid – even if it’s only there as a safety net.

Where Can I Purchase A Tesla Powerwall?

Tesla is extremely protective of its brand and its products – and only certified Tesla resellers are permitted to sell and install the Powerwall in Australia.

Off Grid Energy Australia is a certified Tesla reseller and installer – and we’re very proud of that fact.

You can talk with one of our renewable energy experts if you would like to find out more about purchasing a Tesla Powerwall. Whether you want to add a Powerwall into your existing solar array or design a brand-new system – we have the knowledge and the experience to complete the entire process.

To find our more, contact the team at Off Grid Energy and we can help you to move one step closer to complete energy independence.